Do you create electronic music or sound design? Or are you a student or professional in Audio / Music Technology? If so, I am running a study over the next few weeks (August and September) and would be great to have your participation!

You will be asked to collaboratively mix a short track using a shared VR spatial audio app. You will then be asked to complete a survey about your experience.

The study will take two hours to complete. All studies will be done in the Media and Arts Technology studios in the Engineering and Materials Science building of Queen Mary University of London, Mile End Road, Tower Hamlets.

If you are interested in the context of the research I have some resources here:

Managed to get the VR version of Polyadic scaled down, instead of a massive panel you have to stretch across to operate on, the scaled down version is roughly the width of an old MPC. This is important for visual pattern recognition in the music making process, but also the sizing allows for alternate workspace configurations, that are more ergonomic and can handle more toys being added!

To get the scaled down features to work a tool morphing process has been designed. The problem is the Oculus Rift and HTC Vice controllers are quite large, especially in comparison to a mouse pointer. So by using smaller hand models when you are in the proximity of the drum machine you can have a higher ratio of control to display, with respect to less of the hand model being able to physically touch features in the interface. 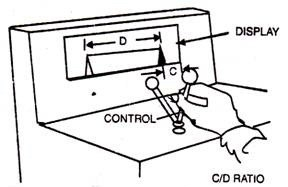 Control-display (C-D) ratio adaptation is an approach for facilitating target acquisition, for a mouse the C-D ratio is a coefficient that maps the physical displacement of the pointing device to the resulting on-screen cursor movement (Blanch, 2004), for VR it is the ratio between the amplitude of movements of the user’s real hand and the amplitude of movements of the virtual hand model. Low C-D ratio (high sensitivity) could save time when users are approaching a target, while high C-D ratio (low sensitivity) could help a user with fine adjustment when they reach the target area. Adaptive Control-Display ratios such as non-linear mappings have been shown to benefit 3D rotation and 3D navigation tasks.

But the consequence of this mapping change will be an expressive difference. In the original prototype with the oversized wall of buttons and sliders, the experience of physical exertion might have been quite enjoyable? By reducing this down, a very different body space will be created, the effects of this remain to be tested. Subjectively it did feel more precise and coherent as a VR interface, less toy-like and comical. As mentioned in the introduction, the sizing can have implications for pattern recognition. The smaller size allows you to overview the whole pattern while working on it, whereas previously the size meant stepping back or craning your neck to take it all in. It would be interesting to know how much effect the gestalt principles of pattern recognition have on cognitive load in music making situations, given the time-critical nature of the audiovisual interaction.

Do you create electronic music? Are you a musician, producer, artist or DJ? Or are you a student or professional in Music / Music Technology? If so, I am running a study over the next few weeks (July & August) and would love your participation!

You will be invited to use and compare two different interfaces one in virtual reality and another screen-based. You will be asked to create some drum loops collaboratively with another person using the provided interfaces. You will then be asked to complete a survey about your experience.

The study will take two hours to complete, and you will be paid £25 for your participation. All studies will be done in Computer Science building on the Mile End Campus of Queen Mary University of London.

Unfortunately, this study has ended and further appointments are not being made.

If you are interested in the context of the research I have some resources here: